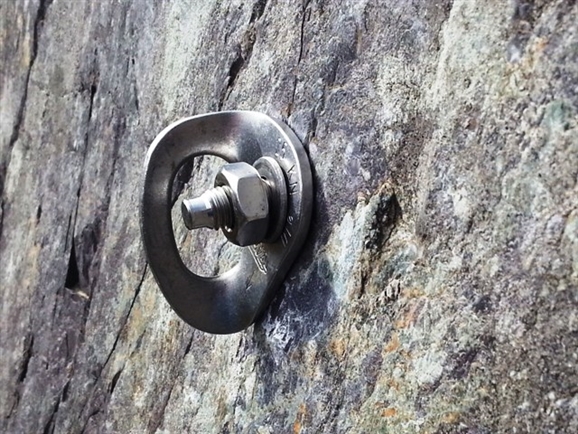 Climbers are warned about potential bolt failures in the slate quarries of North Wales. The BMC advise climbers to use caution with any loose expansion bolts used for protection and in particular for lower off’s on popular routes. Resin bolts are not affected.

After a 10mm expansion bolt was reported to have failed on a popular route lower off on the Sidings, locally based instructor and coach Mark Reeves started checking bolts and lower offs on the most popular routes in the quarries. Mark used a hydraulic bolt testing rig to pull test a number of bolts. Several things became apparent:

The local bolt fund (NWBF) has been supporting volunteers undertaking this testing and remedial action replacing loose bolts on the most heavily used routes with resin bolts.

This work is being done by volunteers with limited resources, so it may be some considerable time before all loose bolts are checked and replaced.

You may be asking how has this happened? During original testing the results with both 10mm and 12mm expansion bolts were good on slate. Follow up tests made more recently confirmed that when initially placed, expansion bolts appear to meet UIAA standards.

With heavy use, the softness of slate appears to allow degradation of the rock leading to movement and weakening of the bolt because it no longer securely fits into the drilled hole.

Resin bolts do not stress the rock except when loaded and spread the load more evenly so are a good choice for heavy usage situations and soft rock.

This website uses cookies to improve your experience while you navigate through the website. Out of these cookies, the cookies that are categorized as necessary are stored on your browser as they are essential for the working of basic functionalities of the website. We also use third-party cookies that help us analyze and understand how you use this website. These cookies will be stored in your browser only with your consent. You also have the option to opt-out of these cookies. But opting out of some of these cookies may have an effect on your browsing experience.
Necessary Always Enabled
Necessary cookies are absolutely essential for the website to function properly. This category only includes cookies that ensures basic functionalities and security features of the website. These cookies do not store any personal information.
Non-necessary
Any cookies that may not be particularly necessary for the website to function and is used specifically to collect user personal data via analytics, ads, other embedded contents are termed as non-necessary cookies. It is mandatory to procure user consent prior to running these cookies on your website.
SAVE & ACCEPT